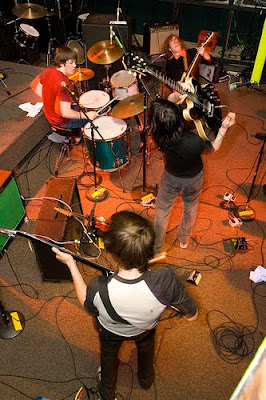 Review of The Hugs from June, 2007 @ the PDX POP NOW CD COMP Release Party- Hawthorne Theatre...Thought this was funny and should share.
"The Hugs came on first. Despite terrible acoustics, I loved these kids. None of them were out of highschool. Their instruments were so loud (I mean, a microphone on an amplifier, really?) that it was impossible to distinguish one from the other, much less hear the vocals. There was a lot of rabid screaming, but that's to be expected of a kid who's just learned he can sing - his voice was unique in that pseudo-British, making out with the microphone sort of way.

I'm tempted to describe them as White Stripes meets the Beach Boys. The tracks started to sound the same after a while, but when they paused between choruses for gentler, almost Californian jazz melodies, I wanted more. The lead singer and guitarist leapt about the stage with such fervor that I was, at times, in stitches laughing. At various recurring points he had knocked over the microphone stand, got the cord tangled around his neck, unplugged his amplifier and smashed into the drumset. Just the same, the fervor carried throughout the audience. It was refreshing to see young people so in love with what they were doing. "
Delen Kitchen
PS. you can find the debut album's lead single "North" on the 2007's Pdx Pop Now Comp. Available in stores now!
Posted by The Hugs at 6:09 PM